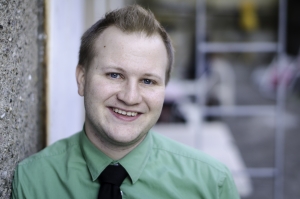 They say that the second year of living in New York is the hardest. By that time, the rose-colored glasses have faded and the hype of living in one of the world's greatest cities is gone. That definitely was the case for me. In this last year, I worked several jobs just trying to keep afloat, been mugged at knife point, was pick-pocketed on New Years, probably was the sickest I have ever been in my life, had no money, and not had much luck in the audition room. Which is why when I got the call asking if I would like to come be a part this year's cast of Saturday's Voyeur, I didn't have to think twice. Last year, I had such an amazing time I would have to be crazy not to do it again. I made so many great friends, I got to work with some of the state's most amazing talent. The staff at SLAC is incredible. I was honored to get my equity card because of Voyeur 2013. So many great things came out doing "Voyeur" last year; it would be hard to top that experience. But, the universe works in mysterious ways. By coming back, I have been blessed in so many ways. So let's count the many blessings and name them one by one.

1. I get to see my family. I love my family, and now that I am out in New York I don't get to see them as much as I like. Now I get to spend an entire summer with them...AGAIN! My nieces and nephew are bigger, smarter, and even more rambunctious. Spending time with my sisters and my parents is always great.

2. I get to work with my sister. Yeah, in case you didn't you know, the Madson family is slowly taking over SLAC. First me, now Shea. She just graduated from the U of U with a degree in sound design and is the sound mixer for "Voyeur". Which is really cool because I was the one that suggested she look into a career in sound design and now we finally get to work on our first professional show together. I can't tell you how incredibly cool it is to see her up in that booth and how proud it makes me.

4. I get to work with some new amazing actors. This year "Voyeur" added Jaron, Hayden, Angie, and Olivia to the cast. The talent here in Utah really is amazing and I am simply blown away by each of the actors. Working with them and getting to know them for the last couple of months has been so much fun.

5. Latoya! Not many people know that Latoya and I have been friends for a really long time. We went to high school together (Go Darts). We shared the stage many times in those days. Since high school, we went our separate ways in pursuit of bettering ourselves as actors. I went to the U of U and Ohio University and Toya headed down south to Southern Utah University. It's been 11 years since we have been on stage together and all I can say is some things never change. She is still an incredible performer and an even more incredible friend. Sharing the stage with her again has been awesome.

6. Working with Cynthia, Kevin, Elena, Janice and Kristina. I worked with all these guys last year (except Kristina) and each of them is amazing in their own way. Cynthia is such a fun director and so fun in the rehearsal room. Kevin Mathie is not only one of the most talented people I have ever met in my life, but he is the nicest person you will ever meet in your life. If there was an award for nicest guy in the world, Kevin would win it every year. Elena Dern is so talented in so many ways, and has the patience of a saint when it comes to going through choreography. As for Janice and Kristina, they have in my opinion the hardest job in theatre and never get any of the credit for what they do. As Stage managers they are literally the glue that keeps everything together and with those two its super glue. Both are super sweet, and so good at their work.

7. Improv. I have been doing improv for years, but I don't get to play that much in New York, so whenever I am back in Utah you will be sure to see me play with Quick Wits out in Midvale or Off the Wall up in Ogden. I love those guys and going on stage with them is like a family reunion. Plus, this summer I got to workshop my idea for a new long form format up in Ogden. "Improv Against Humanity!" An improv show that is based on the popular card game "Cards Against Humanity" and it is so much fun to do. I can't get enough of it.

8. Food. Whenever I talk to people about Utah I can't help to talk about our food culture. So many gems are here in Utah, and you can't keep me away from them while I am here. If only I could keep away the pounds I gain.

9. Saying goodbye to my childhood home. My parents recently moved, but by coming and doing "Voyeur" I got to come home and spend one last month in the house I grew up in. The place where I saw my sister get married. Where my brother would chase me through the halls. Where I had my first kiss. So many memories, I would have never of got to relive.

10. Getting to perform. Work as a young actor can be hard and I am just happy to be on stage again. There is nothing like getting in front of an audience and taking them on a journey. To make them laugh, to make them cry, or just make them think of something they may not thought of before. It's the most satisfying experience ever and, how I make my mark on the world. It's in my soul to perform, and I am so honored to be on that stage and perform for all of SLAC's awesome patrons.

Tagged under
Saturday's Voyeur 2014
back to top