Principally because of her extraordinarily beautiful music, the passionate and iconoclastic mystic Hildegard is almost as well known today as she was in her own 12th Century. Then, she was famous throughout Europe for her visions, the only woman to have her writings read aloud in synod by the Pope, himself. Hildegard is preparing to complete her book of revelations and present it to the Holy See when a penitent named Richardis arrives at her monastery and profoundly disrupts her world. VIRTUE tells the story of what happened.

Tim Slover's plays have been produced off-Broadway and in professional regional and university theatres all over the US and in Canada. The Fulton Theatre in Lancaster, PA, commissioned and premiered two of Tim’s plays, TREASURE (2004) and LIGHTNING ROD (2006). In 2006 he was appointed writer-in-residence at nearby Franklin & Marshall College. In the fall of 2008 his play, JOYFUL NOISE, received a staged reading at the Hampstead Theatre’s Michael Frayn Space in London. DESPISED, his screenplay of JOYFUL NOISE, is optioned by Slickrock Films. His new eight-part radio drama, THE CHRISTMAS CHRONICLES, will air December 2009 on KBYU FM.

Tim’s writing awards include the Grand Prize, 65th Annual Writers Digest Writers Awards; the Christopher Brian Wolk Award for Playwriting Excellence (Abingdon Theatre); a Cine Golden Eagle; a Freedoms Foundation George Washington Honor Medal; and a Hopwood Award for Best Play. His plays are published by the Samuel French Co. and Encore Performance Publishing; other of his writing has appeared in the National Biography of American Theatre, Sunstone Magazine, and been published by Signature Books and Silverleaf Press.

VIRTUE was written in association with the Penn State University School of Theatre, and further developed in the New Plays Workshop of the University of Utah’s Department of Theatre and writers groups in Salt Lake City and Provo. (Thank you, everyone!)

VIRTUE was given a staged reading in London last June as part of the Arch 468 Propects Series. Tim is an associate professor in the Department of Theatre at the University of Utah.

I first became aware of Hildegard through the transcendant vocal music which she claimed came to her, along with the rest of her visions, directly from the "Living Light," an avatar of God. If you listen to the cd which I heard first, A Feather on the Breath of God (Hyperion), you can decide for yourself whether or not she was telling the truth. Intrigued—more like intoxicated—I sought out her writings and accounts of her life. Two books stood out: Hildegard of Bingen: the Woman of Her Age, by Fiona Maddocks (Doubleday), and a particularly lovely translation of some of her writing (including Scivias, which is important to the story told in VIRTUE), Hildegard of Bingen: a Spiritual Reader, by Carmen Acevedo Butcher (Paraclete Press). In both books, Hildegard seemed so present, as though she had a foot in the 12th Century and a foot in our own time. Yes, she wrote recondite visions, difficult to appreciate in our day, but she also penned books of herbal medicine (for which the New Agers fervently claim her) and midwifery. And I loved her story: enclosed as an anchorite at the age of seven, freed from her cell and made a prioress of young women by thirty, a reluctant but eventually prolific visionary all her life. 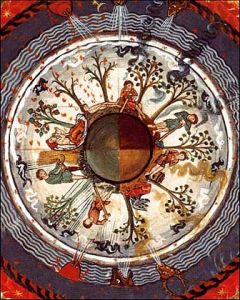 It was the visions that mattered most. They compelled her towards heterodoxy, even iconoclasm, as they led her towards doctrine and practice unique in her, perhaps any, day. Women in monasteries, she learned from the Living Light, were Queens of Heaven, and they should look like it; so she dressed her nuns in white robes and gold jewelry; she took off their veils and adorned their heads with gold crowns. Music, she learned, was the speech of angels. So she wrote the world’s first opera, as well as its first morality play: The Play of the Virtues ("Ordo Virtutum"). Greenness ("viriditas") was what God loved best, she was told by her celestial muse, and so she praised fecundity in all its forms. As Thomas Cahill points out in his excellent Mysteries of the Middle Ages (Anchor Books), Hildegard was "no prude, and she makes no attempt to mask or excuse the sex and violence that inhabit her" (p. 96).

No wonder then that Hildegard’s human interactions were somewhat fraught. Imagine being the unfortunate man who tried to channel and control her talents, as her abbot, Cuno, did. (In a letter to him, she once accused him of being "a busybody, digging in the private business of others.") How would it have been to be Volmar, the faithful monk who worked alongside her for decades, taking down the visions she received and transliterating them into a Latin more elegant than she possessed? One account of his life speaks of a moral struggle he had early in his career with Hildegard. Was he in love with her, or did he want to strangle her? Or both?

But most fraught of all was her relationship with a young aristocrat named Richardis, who came to her monastery of St. Disibod and shook her profoundly. A vision Hildegard received soon after her arrival speaks of "a beautiful girl, bareheaded, with dark hair wearing a red tunic that flowed about her feet": in the vision this is Ecclesia, the Church, but it is also clearly this bewitching girl. And in the Ordo, Richardis gets translated again, this time into Anima, the Soul of mankind. When the young novitiate was forcibly taken from her, Hildegard’s heart broke, and she prosecuted a letter-writing campaign of pain and outrage which even reached the Pope. To Richardis, herself, Hildegard wrote of her distress "because of my love for a certain noble individual.… Now let all who have grief like mine mourn with me, all who have had such great love in their hearts and minds for a person as I have had for you." A love letter, surely.

Piety and passion, profound spirituality coupled with unabashed sensuality, a love for the Church and an absolute commitment to the searing personal visions which led her away from some of its doctrines: these are the paradoxical hallmarks of this remarkable medieval woman. For all those on a spiritual quest in our own difficult age, hers is not a bad star by which to steer. 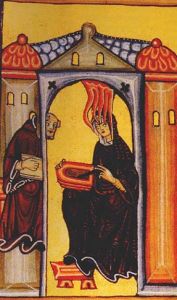 Tagged under
More in this category: NPSS: Prophets of Nature »
back to top