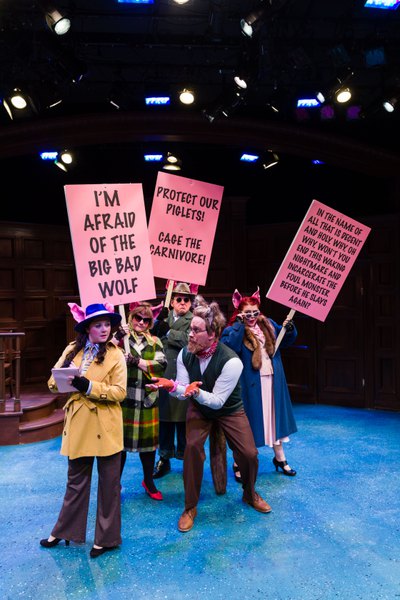 The musical casts theatergoers as the jury in the Piggsylvania trial of Alexander T. Wolf. During the trial, the wolf explains how he earned his “big, bad” reputation, thanks to an ill-timed sneeze that accidentally blew two houses down, which led him to feast on pork.

It’s the ninth annual kids’ play produced by SLAC, aimed at encouraging subscribers to introduce the children in their lives to live theater. As part of the run, the company offers morning matinees for elementary students from 12 Utah Title 1 schools.

The musical encourages kids to see another point of view, says SLAC guest director Penny Caywood, artistic director of the University of Utah’s Youth Theatre program. That’s one of the themes in the lesson plan Caywood created for teachers to support the show.

It’s a relevant theme at a time when the term “fake news” is often thrown around on news broadcasts, Caywood says. The musical offers “a very kid-friendly way to start thinking about putting ourselves in other people’s shoes, and that can translate to other things,” she says.

The director praises the musical’s cast for their energy and experience. And she praises the stage play for its witty language and its bouncy, singable tunes.

Different verdicts could be handed down at every show, Caywood says.

The court reporter who serves as the story’s narrator is embedded with the audience, while the court bailiff directly addresses theatergoers. And the show’s thrust stage was designed to invite audience participation. “I wanted it to feel immersive, I wanted the action to be happening all around,” Caywood says. “I don’t want kids to sit quietly.”