Finding the Connection: My Exploration for STREETLIGHT WOODPECKER 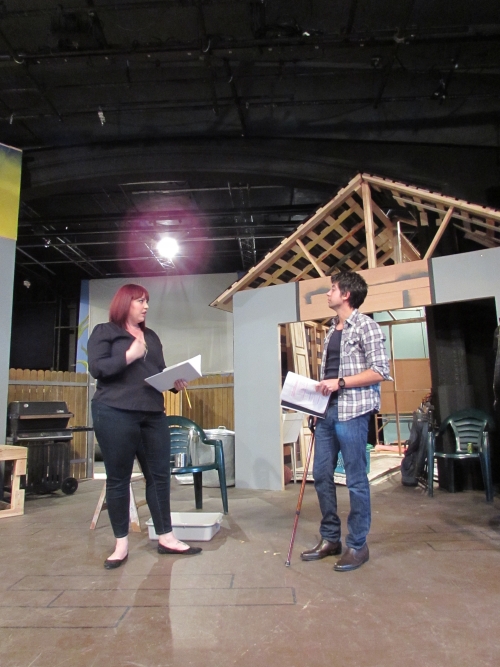 The very first thing I ever saw at SLAC was a New Play Sounding Series reading of a play called STREETLIGHT WOODPECKER. I brought my friend Gretchen with me and we both left gushing about how much we liked it and how we thought Stefan Espinosa, who played the lead role of Benji, was incredible. It’s a strange feeling to now be working alongside Stefan (who, by the way, is still incredible in this role) as I play his sister, Elizabeth, in STREETLIGHT WOODPECKER, which will receive its World Premiere here at SLAC. The entire team working on this show is amazing. Shawn Fisher has provided such a compelling, complex story and has been at nearly every rehearsal which is so exciting for us. Richie Call’s direction is sensitive, highly envisioned, and clear, and he’s so damn smart. Matt Sincell, Carleton Bluford, and Stefan are absolutely brilliant actors—watching them on stage teaches me so much every single day. I know it all sounds very gushy and complimentary but I sincerely am in awe of my co-workers.

As with any role, it’s an actor’s job to do some character research. I am quite ignorant as to what it is like to have a family member (or even friend) return wounded after serving our country. Since this is part of Elizabeth’s journey, I knew I needed to talk to people who have had that experience. I was telling my friend Lisa about the play and she offered to put me in touch with her friend Jason McNamara, one of the co-founders of an organization called Squad Leaders. Jason and his friend Ben started the non-profit with the goal of successfully transitioning American veterans from military life back into their everyday lives as a part of a family and community. (You can read all about their amazing organization at squadleaders.org.)

Speaking with Jason definitely opened my eyes to how difficult it can be for family members to welcome back someone they love very much who has changed the way that veterans often do. I asked him numerous questions about the relationship Benji and Elizabeth have—why doesn’t Benji open up to her about what he experienced over there? What advice would you give to a family member like Elizabeth in real life on how to reconnect with Benji? What does it feel like for the vet when the family is so desperately trying to get them to open up? Jason works with every situation you can think of when it comes to veterans and their families and his words were so inspiring and thought-provoking.

Perhaps the most poignant advice Jason gave was meant for people like Elizabeth on how to reconnect with a return vet family member. He said (I’m paraphrasing, but the jist of it was this), “You don’t ask the questions about ‘what it was like over there’ and ‘if you saw people die’. They were there in that situation and you weren’t so there is no way for you to have a connection with their story and what they went through, even though you love them and want to be there for them. It’s very much like being an actor and having to describe what you do to put on a show to someone like me who has no idea what it’s like. I can listen, but the only people who are going to understand are other actors. I have no connection to your story. The best thing to do for a return veteran is to try to recreate the experiences you had with them before they went away. Of course they’re going to be different people, but you have no control over that. Did you like going to the movies with your brother before? Go to the movies. Re-create that environment for them and if they are ever going to open up to you, that’s how it will happen.”

STREETLIGHT WOODPECKER is an examination of family, culture, and faith, and the relationship between Elizabeth and Benji personifies all of these things. I hope you get a chance to see this thought-provoking play. It truly is beautifully written and we can all learn a lot from the lessons taught by this story. I will continue my research and see you in the Upstairs Theatre soon!