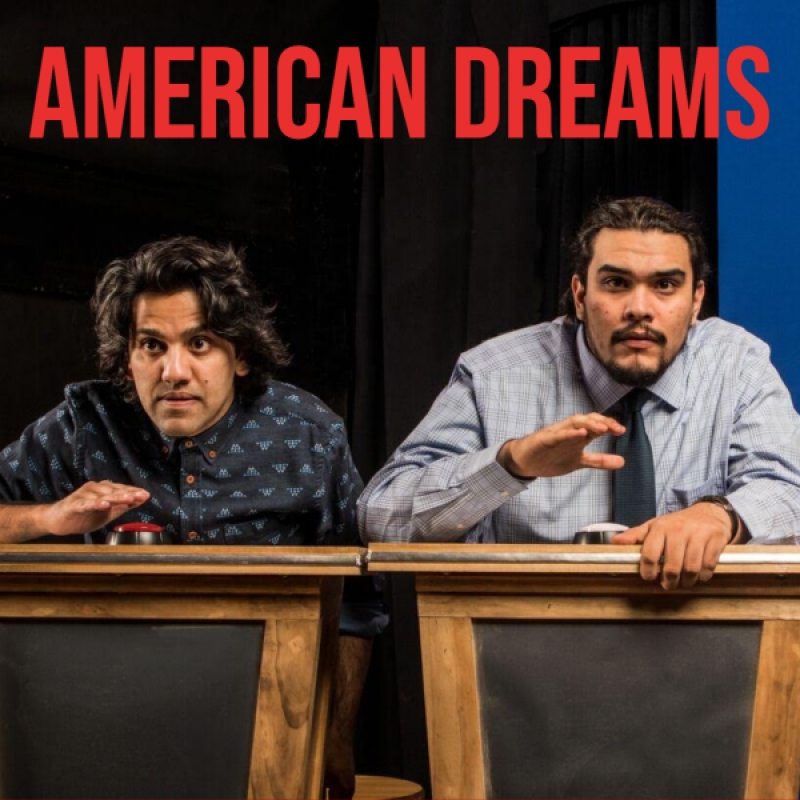 Created and developed by Leila Buck and Tamilla Woodard with Jens Rasmussen in collaboration with Osh Ghanimah, Imran Sheikh and the Company

Free Gift to Subscribers | Pay What You Can

Note: All showtimes are Mountain Time

You are invited into the live online studio audience of American Dreams, a game show where you, the audience, decide which contestant will receive the ultimate prize: instant citizenship to “the greatest nation on earth”.  This playful participatory performance takes a page from America’s favorite game shows and uses voting, polling, trivia and more to explore who and what we choose to believe.  Welcome to American Dreams. “It’s a Game. It’s a Show. It’s America!”

AMERICAN DREAMS was first produced by Raymond Bobgan for Cleveland Public Theatre in 2018. This fall, the show launches as a live online theater production nationwide in a virtual tour that will begin at Arizona State University and then head across the U.S., inviting audiences into playful, timely engagement and dialogue around immigration and what it means to be a citizen of this country.

Working Theater is the lead producer for the virtual production of American Dreams in partnership with Round House Theatre, Salt Lake Acting Company, HartBeat Ensemble, The Bushnell Center for the Performing Arts, University of Connecticut, Free Center in association with Charter Oak Cultural Center, Hartford Stage, TheatreWorks Hartford and Marin Theatre Company, co-commissioned by Arizona State University’s ASU Gammage and Texas Performing Arts at the University of Texas at Austin, with support from the JKW Foundation.

“This smart, provocative play deserves to go on to be produced in as many U.S. cities as are on the map”  -Andrea Simakis - The Plain Dealer

in collaboration with Osh Ghanimah, Imran Sheikh and the company

AMERICAN DREAMS was co-commissioned by Arizona State University’s ASU Gammage and Texas Performing Arts at the University of Texas at Austin, with support from the JKW Foundation.

Leila Buck (Playwright/ Co-Creator/ “Sherry”) is a Lebanese American playwright, actor, facilitator and educator who has performed and developed her work and others at/with the Public, NYTW, Culture Project, BRIC Arts, Brooklyn Museum, En Garde Arts, Cleveland Public, Cal Shakes, Mosaic Theater at Arena Stage, and the Wilma (Barrymore Award). She has performed and taught theatrical tools for literacy, conflict resolution, and intercultural engagement to youth, educators, aid workers, UN delegates and others across the U.S., Europe, China, Australia and 11 Arab countries. Her play 1001 Nights (A Retelling), commissioned by Cal Shakes and co-written with director Evren Odcikin, was selected for the 2020 Kilroys List. She is a TCG/Fox Fellow, a member of the Public’s inaugural Emerging Writers Group, a Usual Suspect with NYTW, and teaches Creation and Representation in U.S. Theater at NYU. www.leilabuck.com.

Jens Rasmussen (“Chris”/ Co-Creator/ Co-Developer) is a founder of BECHEL PROJECT and a performer, collaborator, and producer of the American Dreams Tour. He has devised and designed movement for ensembles across the country. OFF BROADWAY & NYC: Underland, 59E59; I Came to Look for you on Tuesday, La MaMa ETC; Seen By Everyone, HERE; REGIONAL: Skin Tight (Acclaim Award) & Gruesome Playground Injuries (League of Cincinnati Theatres Award) Know Theatre; Conference of the Birds, Folger Shakespeare Theatre (Helen Hayes Recommended); Merchant of Venice, Milwaukee Rep. He also teaches movement and playmaking at universities across the country. Proud AEA and SAG-AFTRA union member. www.jensrasmussen.info

Ali Andre Ali (“Adil”/ Co-Developer) is a Palestinian/Irish-American actor and musician based in New York. As an actor he has worked regionally and with numerous New York based companies. Some of his recent credits include P*ssyc*ck Know Nothing (Target Margin Theater), 10,000 Balconies (TheatreSquared), and Eh Dah? Questions for my Father (Next Door at NYTW). His TV credits include Ramy and Dead on Arrival. As a musician he writes and performs with his music duo fajjr+ali. Their debut EP eleven90 was released in 2019 and is available on all major streaming platforms. www.aliandreali.com. | @aliandreali

India Nicole Burton (“Bree”/ Co-Developer) is an actress, director, playwright, and producer. She graduated from The University of Akron in 2011 with a BA in Theatre Arts with an emphasis on performance. India is also a founder of Ma’Sue Productions, an African American theatre company where she was also co-artistic director until 2015. Some of India’s regional acting credits include Julius Caesar (Portia), Karamu House Inc; Bootycandy (Young Black Mother & Ensemble) Convergence Continuum; An Octoroon (Dido) Dobama Theatre; Orlando (Orlando) New World Performance Lab; and American Dreams (Bree) Cleveland Public Theatre 2018 production. India was awarded The National New Play Network Producer in Residence Fellowship for the 2018/19 and 2019/20 seasons at Cleveland Public Theatre. India is currently workshopping her original piece entitled Panther Women: An Army for the Liberation. Panther Women is a devised piece written and directed by India in its first workshops.

Andrew Aaron Valdez (“Alejandro”/ Co-Developer) (he/him/his) is a Chicanx educator, administrator, poet and theatre artist from Donna, Texas. Andrew is a C.A.R.E. Teaching Artist at Cleveland Playhouse, educator for the Indigenous Cultures Institute, Steering Committee Member of the Latinx Theatre Commons, a 2019-2020 Americans for the Arts Arts & Culture Leaders of Color Fellow, a 2019-2020 Cleveland Public Theatre Premiere Fellow and a 2020-2021 Artist in Residence at the Julia De Burgos Cultural Arts Center. Andrew is a Terry Foundation Alumni and received his bachelor's degree in Fine Arts - Theatre Studies from the University of Texas at Austin. @drewzymandias www.andrewaaronvaldez.com

Colleen McCaughey (Production Stage Manager) is a stage manager, performer, and singer. She holds a Bachelor’s degree in both Theatre and Political Science from Allegheny College. From 2013-2015, she worked in New York City as a stage manager for various theatre companies including The Play Company, The Flea Theater, and Lincoln Center, while serving as the Administrative Associate for Dixon Place Theater. She has served as a performer and stage manager at Cleveland Public Theatre (CPT) since 2015, in addition to her role as Associate Director of Development. She was the production stage manager for the 2018 world premiere of American Dreams at CPT.

Carolina Arboleda (Assistant Stage Manager): Off-Broadway: Fandango For Butterflied (And Coyotes) (EnGarde Arts), What To Send Up When It Goes Down (The Movement Theatre Company), Novenas For A Lost Hospital (Rattlestick Playwrights Theater), She Calls Me Firefly (Parity Productions & New Perspectives Theatre Company.) International: Festival de Teatro Alternativo, Festival de Mujeres En Escena Por la Paz. She is delighted to be collaborating for the first time with the Working Theater.

Tamilla Woodard (Director/ Co-Creator) is the new co-Artistic Director of Working Theater, former BOLD Associate Artistic Director at WP Theater, and the co-founder of PopUP Theatrics. She also served as the Associate Director of Hadestown on Broadway. Recently named one of 50 Women to Watch on Broadway, Tamilla is a graduate of Yale School of Drama, where she currently teaches. Last season her work included the Lucille Lortel nominated Where We Stand by Donnetta Lavinia Grays for WP Theater and Baltimore Center Stage, Caryl Churchill’s Top Girls at American Conservatory Theater and direction and co-conception of Warriors Don’t Cry, a Co-production of The Bushnell Center for the Performing Arts and TheaterWorksUSA.

Katherine Freer (Video Design) is a multimedia designer, filmmaker, organizer, and educator. Her artistic practice lives at the intersection of story, technology, and civic engagement. It is rooted in joy, curiosity, mutual learning, and the pursuit of justice for all living beings. Katherine is a core collaborator of All My Relations Collective and a proud member of Wingspace Theatrical Design and United Scenic Artists 829. She is an adjunct professor at University of the Arts (Philadelphia) and Teaching Artist with Roundabout Education. Frequent collaborators include: Ty Defoe, Ping Chong, Steve Broadnax III, Kamilah Forbes, Talvin Wilks, and Tamilla Woodard.

ViDCo (Virtual Design Collective) (Virtual Design): is a collection of designers innovating new ways to tell stories and create communities online. Using virtual platforms, ViDCo generates entirely live performances with heightened design elements that bridges Theatre, TV, and cinema tricks into a new online hybrid form. We strategize to use the strongest elements of every discipline to inspire the artistic community to use their tools while we provide them the platforms to tell their stories. We are turning COVID around...literally. ViDCo is: Jared Mezzocchi, Andrés Poch, Tori Schuchmann, Taylor Verrett and Kiana Vincenty.

Ryan T. Patterson (Scenic Design) holds a Bachelor of Science in Mechanical Engineering from the University of Akron and a Master of Fine Arts in Technical Theatre from Kent State University. Ryan has been the Technical Director and Scenic Designer for Porthouse Theatre and Cleveland Public Theatre. Ryan has also done SFX work for the Cleveland Cavaliers. In addition to being an Assistant Professor Ryan currently serves as the Technical Director and Facilities Manager of The University of Mount Union’s Giese Center for the Performing Arts. Fun fact: Ryan has performed six total hip transplants on cadavers.

Kerry McCarthy (Costume Design) received her Master of Fine Arts in Costume Design in 2016 from Kent State University. Since then, she has worked in Northeast Ohio as a freelance costume designer and technician. In addition, she is a member of IATSE Wardrobe Local 883 in Cleveland. Kerry has most recently worked for Cleveland Public Theatre, Beck Center for the Arts, Malone Opera, Oberlin Summer Theatre Festival, Utah Shakespeare Festival, and Porthouse Theatre. She is very grateful for the opportunity to work with the American Dreams team again, especially during a time when so many theatre artists are unable to work.

Sam Kusnetz (Sound Design) is a sound designer, projection designer, composer, photographer, stage manager, and all-around theatrical problem solver working in and around New York City, and across the country. Favorite sound designs include the world premiere of When We’re Gone at Lyric Theatre of Oklahoma, Frost/Nixon and One Flew Over The Cuckoo’s Nest at Portland Center Stage, and La Ruta with Working Theater. Associate designs include The Price on Broadway and many off-Broadway shows at Lincoln Center, Second Stage, New York Theatre Workshop, The Public, The Atlantic, SoHo Rep, Cherry Lane, and others. Sam is a proud member of United Scenic Artists, and the founder of Team Sound, a creator of theatrical tools.

the watsons (Graphic Design) the watsons are a creative collective based in new york. they exist to build lasting relationships between great brands and the people they benefit. while their focus is branding and design, they adopted the ‘creative collective’ moniker because when partners jennifer williams, paul orefice, and maggie monteith hung their shingle in 2003, they broke from the conventional agency model in which all clients paid for all services and created a core team of the best art directors, writers, and strategists they knew — with brilliant freelancers at the ready. their client roster is as diverse as it is deep, including grand central terminal, boston children’s hospital, whole foods market, and more. the watsons have won more than 60 creative awards—including three emmy nominations — and have been written up in the new york times, the wall street journal, paste, out to launch, brand new and the dieline. but their proudest accomplishment is the fact that more than 90% of their growth has come from client referrals, with the most commonly expressed sentiment being “the watsons just get us”.as avid theater lovers, the watsons are thrilled to partner with working theater in support of their mission.

Lory Henning (Production Manager) worked with Blue Man Group in various roles for over 20 years. Her directing credits include the NY Times reviewed Kitty and Lina, and Shrinkage, by Manuel Igrejas, both produced at manhattantheatresource, and Jen + Liz in Love, by Jesse Weaver, presented at the New York International Fringe Festival. In 2018, Lory produced, directed, and designed Recreating Keiter, by Cindy Keiter at the Lion Theater on Theatre Row. She occasionally works as a technical director (No One Is Forgotten, by Winter Miller), producer (honoressentialworkers.com), and often as an event stage manager (TED, UN World Oceans Day, Pulitzer Prize Awards).

Tagged under
back to top