NPSS: How to Make a Rope Swing 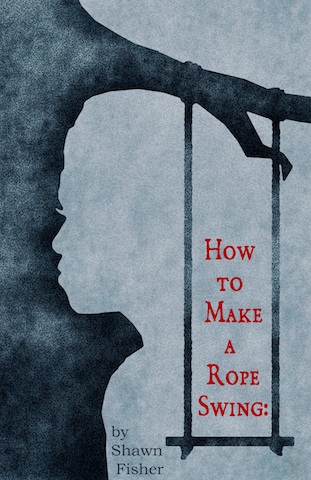 Years ago I came across a massive 300-year-old live oak that had been blown over by a hurricane somewhere in the South. On the side of the tree was a black scar resulting from years of cooking-fires built by plantation slaves, centuries ago. The scar had been mostly closed-over as the trunk had grown thicker and I was struck that, as with emotional scars, it had become deeper but harder to see as time went on. The idea of this "slave tree" and its scar stayed with me and eventually became a catalyst for the play. It led me to explore race from a point of hind-sight and through a societal lens that has evolved through the decades. I decided to set the play in the North, where opinions about race weren't as explicit as they were in the South. Specifically I chose my home region of rural South Jersey, a rustic part of the country once nicknamed the "Mississippi of the North" where some schools were segregated until the 1950's. The main character of Mrs. Wright is inspired by a real woman, Cora Fisher, who was mandated to integrate the elementary schools in Bridgeton, NJ despite the fact that she privately held racist attitudes. The fascinating aspect of her life is that, even with her personal biases, she was a dedicated educator who was successful by all measures and served her students equally regardless of race. This contradiction fuels the story and the character of Mrs. Wright as she prepares for her imminent death and faces the legacy she will leave behind.

SHAWN FISHER (PLAYWRIGHT) is originally from New Jersey and works nationally as a theatre designer and playwright. He is currently based in Utah where he runs the MFA Program in Theatre at Utah State University. His other original scripts include SCOPE, The Crow Song and Do Not Hit Golf Balls into Mexico which was staged here at SLAC last summer. His plays have been produced or had staged-readings in New York, Los Angeles, New Jersey, Pennsylvania and Salt Lake City. He is the Founder and Director of the Fusion Theatre Project, a non-traditional ensemble, based at USU, which creates original works of progressive theatre. Shawn's professional design work includes the New York productions of Seal Sings Its Song for Woken' Glacier Theatre Company, Cop Out and The Talking Dog at the Gene Frankel Theatre and over seventy other designs around the country. Shawn holds an MFA in Theatre from Brandeis University.

A native of New Zealand, Adrianne worked as a director and actor in New Zealand, Australia and England before coming to the U.S. She holds a Graduate Diploma in Theatre Directing from the British Theatre Association in London and an M.F.A. in Directing from Florida State University.

MIKE GARDNER (MICK) is a Utah trained actor, studying at Hurricane High school, Dixie College, and finally graduating from Utah State's acting program in the spring of 2007. While at Utah State and under the direction of Adrianne Moore he played, and was awarded Irene Ryan nominations for outstanding performer, as Simon in Hayfever, Action in West Side Story, and Aunt Spiker in JAMES AND THE GIANT PEACH. Mike has performed at SLAC as Adam in DARK PLAY: OR STORIES FOR BOYS, and as Boy in IF YOU GIVE A MOUSE A COOKIE. Mike has also been seen in EVERYMAN and SHADOWS OF THE BAKEMONO with Meat and Potato theatre. Other favorite roles include the title role of Pippin (HHS), Sydney Bruel in DEATHTRAP (DSC), Arnold Wiggins from THE BOYS NEXT DOOR (DSC) and Mercutio in Pinnacle Acting Companies' production of ROMEO AND JULIET.

MARILYN HOLT (MRS. DELORES WRIGHT) Dr. Holt was a faculty member of the University of Utah Theatre Department for more than 30 years and chair for 9 years. She has played leads in about l20 full productions and has directed 30 at the University, in Salt Lake City, and throughout Utah and the Intermountain West. Some of her favorite roles were in LONG DAY'S JOURNEY INTO NIGHT, KNOWING CAIRO, VIVAT, VIVAT REGINA, and ROAD TO MECCA. Among her favorite productions directed were 2 productions of RAISIN IN THE SUN, one at Pioneer Theatre and again a few years later at Babcock Theatre. She and husband, John, have been married 63 years, are parents of 3 children, grandparents of 5 grand children and - in April, will be great grand parents. She does volunteer work for Juvenile Diabetes Research Foundation, has been president of Utah Theatre Assoc. and Utah Women's Forum. She reads widely, loves theatre of any kind and takes her cat, Buddha, for walks on a leash. She is known in the neighborhood as "The Crazy Cat Lady".

DARRYL STAMP (ARTHUR "BO" WELLS") Darryl is thrilled to be making his SLAC debut after having directed and acted in Wasatch Theater's 2010 Page to Stage Festival. He is also a former Kansas City Drama Desk Award winner for Best Supporting Actor in a Musical. Locally, he has recently appeared as Midge in I'M NOT RAPPAPORT for the Holladay Arts Theater, as Ron in THE TALENTED TENTH for People Productions, and has just completed directing "Niggah," and Blues for an Alabama Sky for the Edward R. Lewis Black Theater Festival at the downtown Sal Lake City library. He has taught acting, Teaching Theater in Secondary Schools, and Shakespeare for Teachers courses at Weber State University, and he is currently a Language Arts teacher and an Assistant Baseball Coach at Hunter H.S. He thanks his wife Mindy and his daughter Sophia for their love and support.

Tagged under
More in this category: « NPSS: Monsterheart NPSS: The Agony and the Ecstasy of Steve Jobs »
back to top