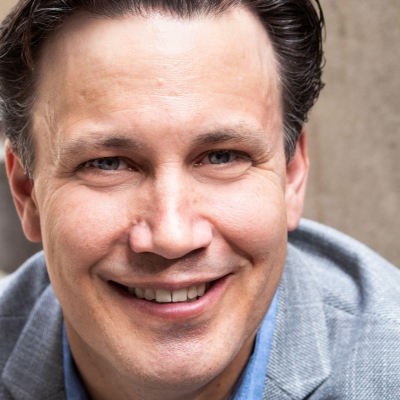 Justin came to SLAC as an actor in 2004 in cast of the SATURDAY'S VOYEUR. He has since appeared in numerous SLAC shows including eleven seasons of Voyeur (between 2004 and 2019), TOO MUCH MEMORY (2010), and STUPID FUCKING BIRD (2016). He has also served as Stage Manager for seven SLAC shows and as director for several NPSS staged readings as well as our 2019 production of THE CAKE.

Justin has performed professionally for three decades (and counting) and has been a proud member of Actors’ Equity Association since 1998. He’s appeared in over a hundred productions around the country. Utah audiences have seen him in dozens of shows at Pioneer Theatre Company, Egyptian Theatre Company, Utah Musical Theatre, Lyric Repertory Theatre, and many other venues. He has worn just about every hat in the business during that time as a designer, manager, technician, builder, writer and director in too many shows to count.

Since 2006, Justin has also been the Managing Director of Walk-Ons, Inc. a Salt Lake company with a mission to bring low-cost theater to under-served audiences. Through their Senior Theatre Project, Walk-Ons has toured to well over fifty Utah community centers and retirement facilities with a shifting line-up of original short plays by, for and about seniors.

An alumnus of Weber State University with a degree in Musical Theatre, Justin went on to earn his MFA in Acting at Northern Illinois University and complete an internship at Dublin’s Gaiety School. He’s taught theatre and communications at LDS Business College, NIU, Triton College, and Weber State.